Tumor microenvironment is considered one of the main players in cancer development and progression. It consists of blood vessels, immune cells, fibroblasts and a large list of extracellular matrix proteins and soluble factors.

Interactions among that microenvironment components govern and modulate many of the cancer hallmarks such as cell proliferation, resistance to death, differentiation state of tumor cells, their ability to migrate and metastasize, and immune response against tumor cells. One of the microenvironment components is a heterogeneous group of multifaceted proteins called matricellular proteins.

Matricellular proteins regulate a variety of biological processes in normal and pathological situations. Many components of this family have been shown to regulate key aspects of tumor biology.

Periostin/POSTN, originally called osteoblast specific factor-2 (OSF-2), was found to be primarilly expressed in the periosteum, which covers the outer surface of bones and is responsible for growth in diameter of bone and for the cortical thickness.  POSTN acts during the phases of embryonic development and body growth, however this is not the only role in the human body. Periostin is expressed in various tissues and is involved in different pathologies such as inflammation, tissue repair, etc. 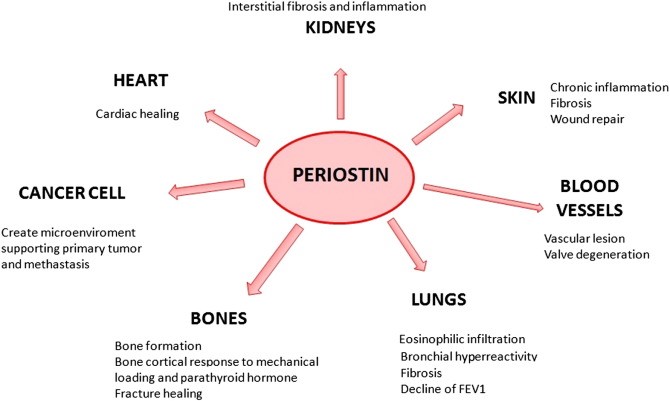 As a matricellular protein it is a key player in the regulation of cell behavior and organization of the extracellular matrix and it also has a role in cancer as summarized by González-González and Alonso .

The authors first focused on expression of POSTN in different tumors. POSTN expression is altered in many malignancies such as non-small cell lung cancer (NSCLC), prostate, pancreatic and ovarian cancer, and this is not a complete list. High POSTN levels in tumours are usually associated with a more aggressive tumor behavior, advanced stage or poor prognosis, suggesting that POSTN levels could be a useful prognostic biomarker.

Several studies have analyzed whether POSTN levels in serum correlate with cancer prognosis.
Serum POSTN levels were increased in patients suffering with NSCLC, colorectal and liver cancer compared to the healthy controls or patients with benign disease. This indicates that it could be an effective biomarker for both diagnosis and survival prediction. However the results from studies to date are more complex and conclusions are not clear enough, thus studies using larger cohorts of patients could be necessary to clarify this question..

González-González and Alonso pointed out that the results of studies showing that POSTN could play an important role in the resistance to treatment in some types of solid tumors. For example ovarian carcinoma patients with high stromal levels of POSTN showed cisplatin resistance compared to those with lower levels.

There are strong experimental data that POSTN is involved in many of the hallmarks of cancer:

Periostin has been shown to induce proliferation in several tumor cell lines. Among others, POSTN increased proliferation of gastric cancer cell lines, concomitantly with the activation of ERK pathway.

Periostin is involved in invasion and metastasis and acts as a potent pro-angiogenic factor. 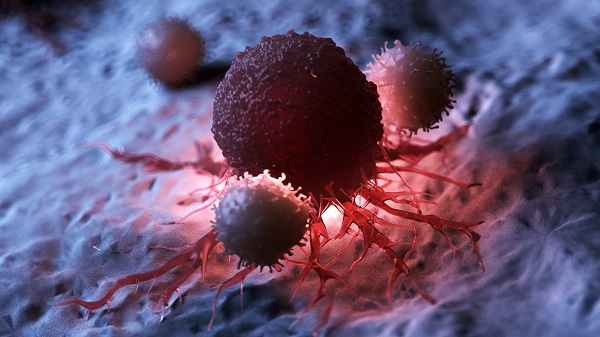 Studies on several cancer cell types showed POSTN as a prosurvival factor-indicating its important role in the resistance to apoptosis under hypoxic conditions.

Since POSTN plays multiple roles in cancer progression, targeting POSTN can be an attractive therapeutic approach. As one of the examples, in mouse lung metastasis model, the administration of anti-POSTN monoclonal antibody significantly inhibited the growth of the primary tumors as well as the number of lung metastasis. This suggests that blocking POSTN could be an attractive strategy to treat cancer.

As the autors conclude, the fact that POSTN can modulate the hallmarks of cancer suggests that this multifaceted protein can have implications for cancer diagnosis and prognosis and, more importantly, for the development of therapies targeting POSTN function. Future research should be directed to consolidate some findings and explore new ones, particularly in the field of prognostic markers and therapy.