What is the connection between cancer and diabetes?

Allegedly nothing, but both share some common features including insulin resistance, abnormal insulin production, healthy cells languishing from lack of energy and a microbiome in poor condition. And there's even more.

Insulin is a peptide hormone produced by beta cells of the pancreatic islets. It lowers blood sugar levels and its secretion is controlled by the level of glucose in the blood. When the glucose level is high, the beta cells secrete insulin into the blood; when glucose levels are low, secretion of insulin is inhibited.

Without insulin, glucose is useless to our cells. When insulin is present in circulation glucose can be bound to its receptors, the cells open up their "gates" and glucose begins to flow into the cells.

What is type 2 diabetes? Basically, it's insulin resistance. The cells cease to be able to communicate with insulin, even if the blood glucose level is sufficient. Cell intake of glucose is limited and sugar concentration in the blood rises. Pancreatic cells are forced to produce more insulin.

Therefore, not only the level of sugar but also insulin increases in the blood of diabetics.

How is cancer related to it?

Fighting infection and mounting an inflammatory response are the jobs of the immune system and white blood cells.

It's a fight which requires energy - a lot of energy. And so the immune system uses cytokines to negotiate with other cells to mobilize energy reserves. Excess glucose is good for cancer cells and fat tissue. But cancer cells are stingy. They take up a large portion of the blood glucose for themselves.

But what if they do not do only this? What if the cancer cells induce healthy cells to become insulin resistant so that the cancer cells have even more glucose for themselves? That's what researchers have tried to find out!

The consumption of glucose by cancer cells is so great that it can be used for detection. If glucose is labeled with an isotope, high usage (tumors) is illuminated on the monitor screen.

From an organismal perspective, cancer cell populations can be considered analogous to parasites that compete with the host for essential systemic resources such as glucose.

American researchers from the Medical Campus of University of Colorado Denver employed leukemia models and human leukemia samples to document a form of adaptive homeostasis, where malignant cells alter systemic physiology through impairment of both host insulin sensitivity and insulin secretion to provide tumors with increased glucose.

Their experiment on leukemic mice has shown that cytokines are spreading from leukemic cell inflammation sites which induce insulin resistance to healthy cells. 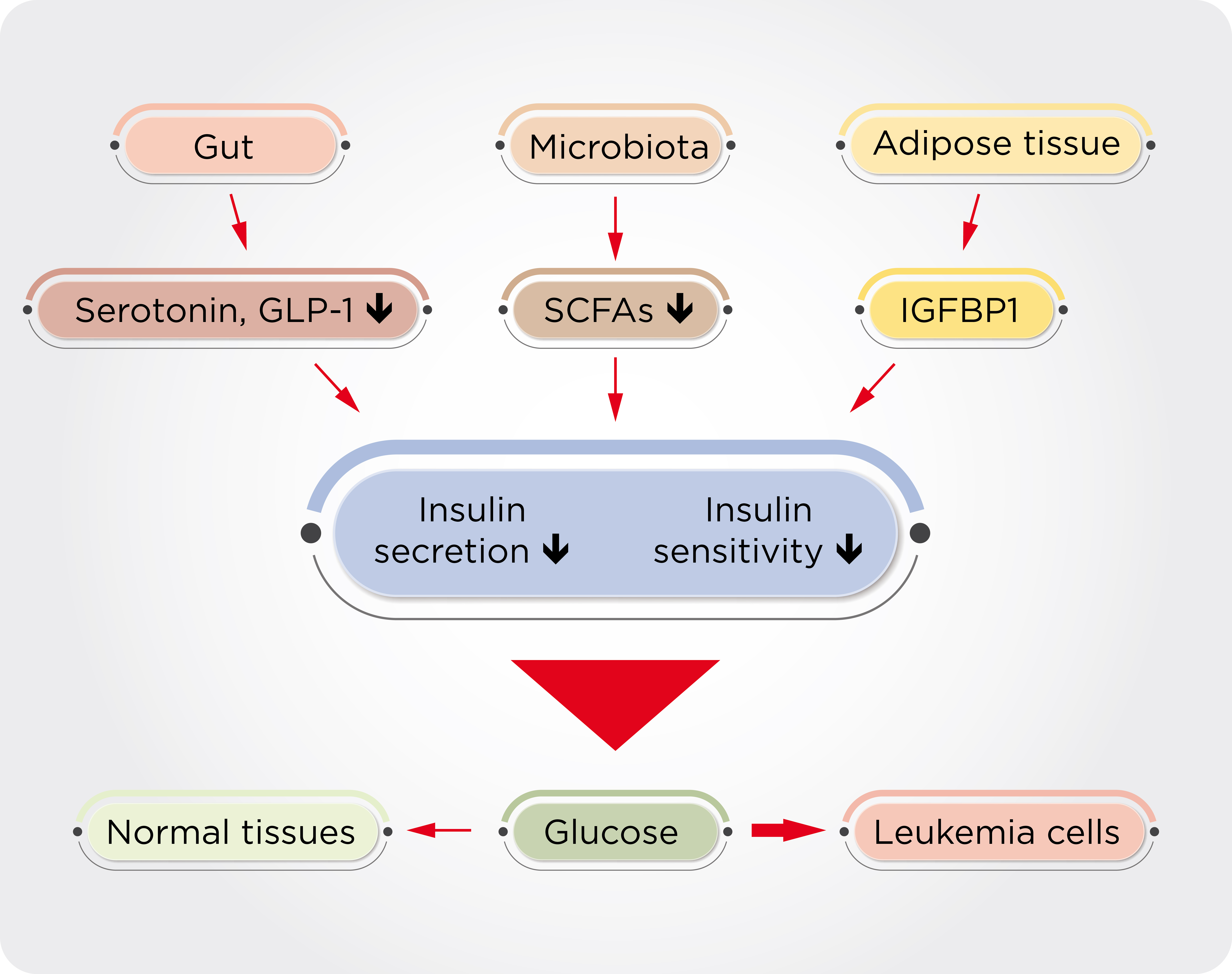 The consequences will come soon. There is leukemia-induced gut dysbiosis, changes in the gut microbes, and the production of toxins that penetrate the whole organism and trigger a systemic inflammatory process.

The final phase is the total disruption of homeostasis.

In another important experiment, scientists delivered insulin to leukemic mice. A very interesting finding was that while healthy cells returned to life again, it did not bring any advantage to leukemia cells.

Scientists have also conducted an experiment in which the molecules of protein IGFBP1 were inactivated by specific antibodies. The experiment was carried out on live mice.

The mice had a noticeable benefit from the experiment. Leukemic mice benefited right in two directions. First, cells in healthy tissues were no longer indifferent to glucose and regained the ability to make better use of it. At the same time, inactivation of the protein in mice increased insulin levels, which benefited all cells, but healthy ones much more.

Experiments at Denver Hospital's laboratories have shown that the transfer of intestinal microbiome of leukemic mice to healthy mice induced a reduction in the response of insulin and consequently increased blood sugar and insulin levels.

Scientists were interested whether the findings in murine models can be recapitulated in humans as well, specifically in human blood cells. They found that patients with acute leukemia had twenty times more blood level of IGFBP1 (compared to healthy individuals).

It is noteworthy that serum IGFBP1 levels were elevated in patients with "only" myelodysplastic syndrome compared with healthy individuals but to much less of an extent than those in cancer patients. Collectively, this results suggest that an abnormal elevation of IGFBP1 may function as a biomarker for disease burden!

According to the authors, IGFBP1 levels can be used as an accurate assessment of remission states of disease.

Their studies provide a paradigm for systemic management of leukemic disease!!