Circular RNA or CircRNA is a type of single stranded RNA over 200 nucleotides long which has a covalent closed loop structure with neither 5′ to 3′ polarity nor polyadenosine (A) tail. These RNAs are widely distributed in mammals, and play an important role in regulating gene expression and various cellular processes.

CircRNA is mainly distributed in cytoplasm and has a stable and high expression in vivo. As circRNA is insensitive to nuclease, it is more stable than homologous linear RNA, which grants circRNA obvious advantages in the development and application of new clinical diagnostic markers and molecular-targeted therapy in cardiovascular diseases.

CeRNA hypothesis is a new concept in molecular biology which describes communication of different kinds of RNA molecules in cell biochemical processes. The main thesis of this hypothesis is that so named competing endogenous RNAs (ceRNAs) regulate other RNA transcripts by competing for shared microRNAs (miRNAs). Models for ceRNA regulation describe how changes in the expression of one or multiple miRNA targets alter the number of unbound miRNAs and leads to observable changes in miRNA activity - i.e., the abundance of other miRNA targets.

Researcher Qiang Su from the department of Cardiology at the Affiliated Hospital of Guilin Medical University, and colleagues in their review applied the concept of ceRNA on cardiovascular disease and reveal a new landscape regulated through a circularRNA-miRNA-mRNA axis.

Interestingly, according the authors circularRNA (circRNA) is mainly involved in the development of cardiovascular diseases through sponge-like regulation of miRNAs, subsequently regulating miRNAs and their targets, mRNA functions!

CircRNA regulation not only participates in the proliferation, differentiation and aging of normal cells, but also plays an important role in the pathogenesis of tumour and cardiovascular diseases. The novel functions of the circRNA–miRNA–mRNA axes in cardiovascular diseases have been expanded over the last 3 years, and new studies are coming now.

Several circRNA have been described which inhibit the proliferation and migration of vascular smooth muscle cells, some are responsible for plaque rupture, attributes associated with atherosclerosis.

The role of circRNA in myocardial infarction has been confirmed and the main mechanisms were described as induction of cardiomyocyte apoptosis, regenerative repair and functional recovery.

Diverse functions of circRNA have been described in cardiac fibrosis regulation. Some circRNAs promote myocardial ﬁbrosis by upregulation appropriate miRNAs, some attenuate fibrosis by miRNAs downregulation. These findings provide a new vision for the study of circRNA in cardiovascular diseases.

Upregulation of circRNAs and its miRNAs counterparts has also been described in diabetic patients with signiﬁcantly increased risk of developing diabetic cardiomyopathy. At least one circRNA is associated with apoptosis of aortic smooth muscle, which in turn aﬀects the occurrence of aortic aneurysms. The discovery of this circRNA could provide a new genetic basis to the diagnosis and treatment of aortic aneurysms.
Studies have found that circRNA was associated with myocardial cell regeneration and vascular regeneration in ischemic heart disease. 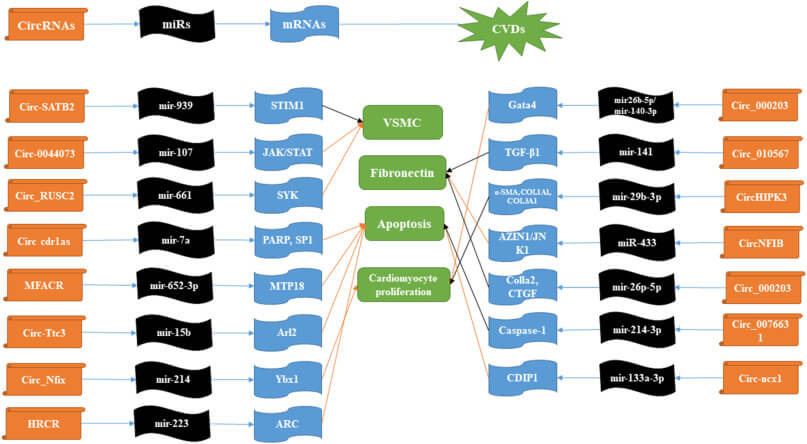 Revealing the occurrence and development of cardiovascular disease at the molecular level will provide a more eﬃcient and accurate method for its early diagnosis and prognosis of the disease. Additionally, circRNA-miRNA targeting mRNA can not only be used as a promising biomarker, but also as an advanced molecular technology to simulate or manufacture therapeutic agents.