The capability to communicate the metabolic state of a cell to neighbouring cells and tissues is crucial for maintaining cellular and organismal energy homeostasis. Unsurprisingly, a wide variety of mechanisms exist to sense, distribute and integrate such information, often involving signals or molecules that travel between cells or to distant organs.

Today, it is known that adipose tissue is an important and dynamic endocrine organ which produces cell signaling proteins collectively referred to as adipokines. Adiponectin is one member of this family.

Timeline of the discovery of adiponectin

Adiponectin, a fat-derived hormone, was first described in the mid-1990s and over the past twenty years it has become one of the most widely studied adipokines to date. For instance, there  are currently more than 20 000 articles on Pubmed about this adipokine.. A recent review by Straub and Scherer published in Nature Metabolism journal provides an excellent overview of the current state of the adiponectin field.

Adiponectin is present in circulation in high levels both in healthy humans and mice, accounting for 0,01% of total plasma protein. Levels are higher in females than in males, which could be due to the effect of testosterone on adipose secretion. There are three main forms in serum – trimers, hexamers and high-molecular weight multimers.

Circulating adiponectin has a plethora of effects on many different target tissues by signaling through its two receptors (AdipoRs – AdipoR1, AdipoR2). Adiponectin’s main functions can be categorized as anti-apoptotic, anti-inflammatory/anti-fibrotic, vascular protective and insulin sensitizing. Although the key sites of adiponectin’s action are the adipose tissue, heart, kidney, liver and pancreas, the ubiquitous expression of adiponectin's receptors suggests that the effects of adiponectin are not restricted to a limited number of tissues. 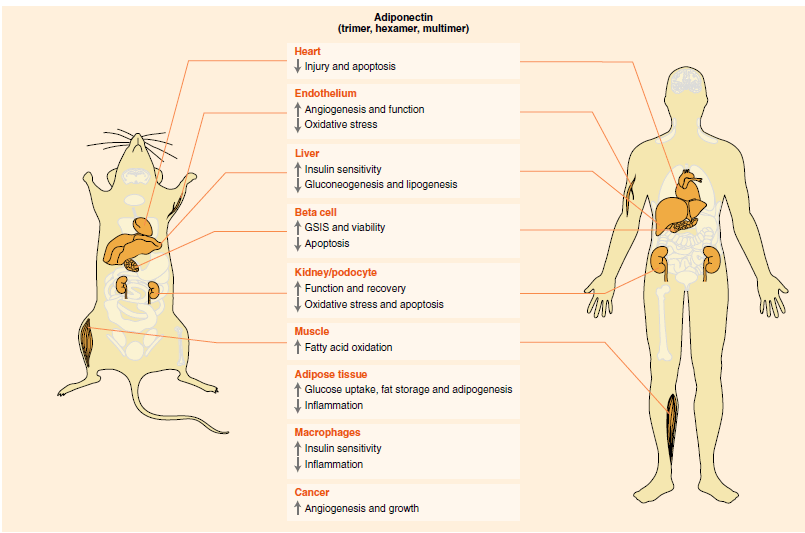 The above illustration shows target tissue and biological activity of adiponection, which is highly conserved between mice and humans.

To date, most understanding of adiponectin has been in its association with metabolic and cardiovascular health. Numerous studies have established inverse correlations between plasma adiponectin and type 2 diabetes, as well as coronary artery disease and myocardial infarction. Studies also showed that serum hypoadiponectinaemia in obesity is associated with insulin resistance, as well as atherosclerosis and hypertension.

Substantial decrease in adiponectin production was observed in local fibrosis and inflammation, which is a root cause of metabolic disorders of insulin resistance. As such, circulating levels of adiponectin can serve as a marker of adipose tissue health and reflect the tissue's overall metabolic flexibility during metabolic perturbations.