Can belly fat help to fight with Infections?

Obesity is a serious problem to many people across the world and is associated with many health problems.This is fact!

But, demonized as all body fat is, deep belly fat known as visceral adipose tissue (VAT) also has a good side: it’s a critical component of our immune system.

Many types of cells of both the adaptive and innate immune systems are found in visceral adipose tissue. Immune cells  influence adipocyte metabolism and biology, and in turn, adipocytes regulate the functions of the immune cells and provide energy.

Moreover, the adipocytes themselves produce proinflammatory cytokines, and adipokines that together act to combat infection, modify the function of immune cells, and maintain metabolic homeostasis.

Regrettably, obesity disrupts both the endocrine and immune functions of visceral adipose tissue, thereby promoting inflammation and tissue damage that can lead to diabetes or inflammatory bowel disease.

Scientists are trying to piece together the complex links between immunity, intestinal microbes and fatty tissues including the large deposit of fat in the abdomen known as the omentum.

The omentum is a fold of fat that hangs below the stomach and covers the intestines. Found in all people, even the most lean, the omentum is actually an independent organ.

Scientists hope not only to gain an understanding of how fat and immunity are linked, but to also develop fat-targeted therapeutics that can moderate the consequences of infectious and inflammatory diseases.

Do you know your fat?

Adipose tissue is divided into brown and white varieties. Brown fat cells help maintain body heat by burning calories. White fat cells are involved in whole-body energy homeostasis and lipid storage and are found both under the skin and in the abdomen, where they are known as visceral adipose tissue. It is this type of fat that can help detect and eliminate pathogens as well as maintain immune homeostasis in the gut.

Omentum supports the generation of blood vessels and fibrous connective tissue that can help repair damaged organs, and also promotes immune responses to fight infection. This adipose tissue plays important immunological roles, but can also serve as a source of chronic inflammation in obese individuals, possibly contributing to metabolic syndrome. The omentum is also a common site of ovarian cancer metastasis.

Many of the immune cells that reside within the omentum are found in aggregates termed fat-associated lymphoid clusters, or “milky spots” for their whitish appearance amidst the yellow fat. In many ways, milky spots are analogous to lymph nodes – they filter the fluid that flows from the abdominal cavity.

B-lymphocytes and macrophages in the omentum appear to tailor their activities to protect the hosts from bacteria that might escape the intestine. These macrophages produce the transcription factor GATA6, which is regulated by retinoic acid, a metabolite generated from vitamin A by enzymes that are abundant in the omentum.

T-lymphocytesin the omentum produce a greater variety and higher amounts of infection-fighting cytokines than their counterparts in other parts of the body.

Recently, researchers showed that VAT-resident memory CD8+ T-lymphocytes in mice respond more quickly to an infection than memory cells at other sites.

The rapid response was due to an altered cellular metabolism in these T-lymphocytes, characterized by the elevated mitochondrial function and increased uptake of fatty acids which are major products of adipocytes.

The dark side of fat’s T-lymphocytes 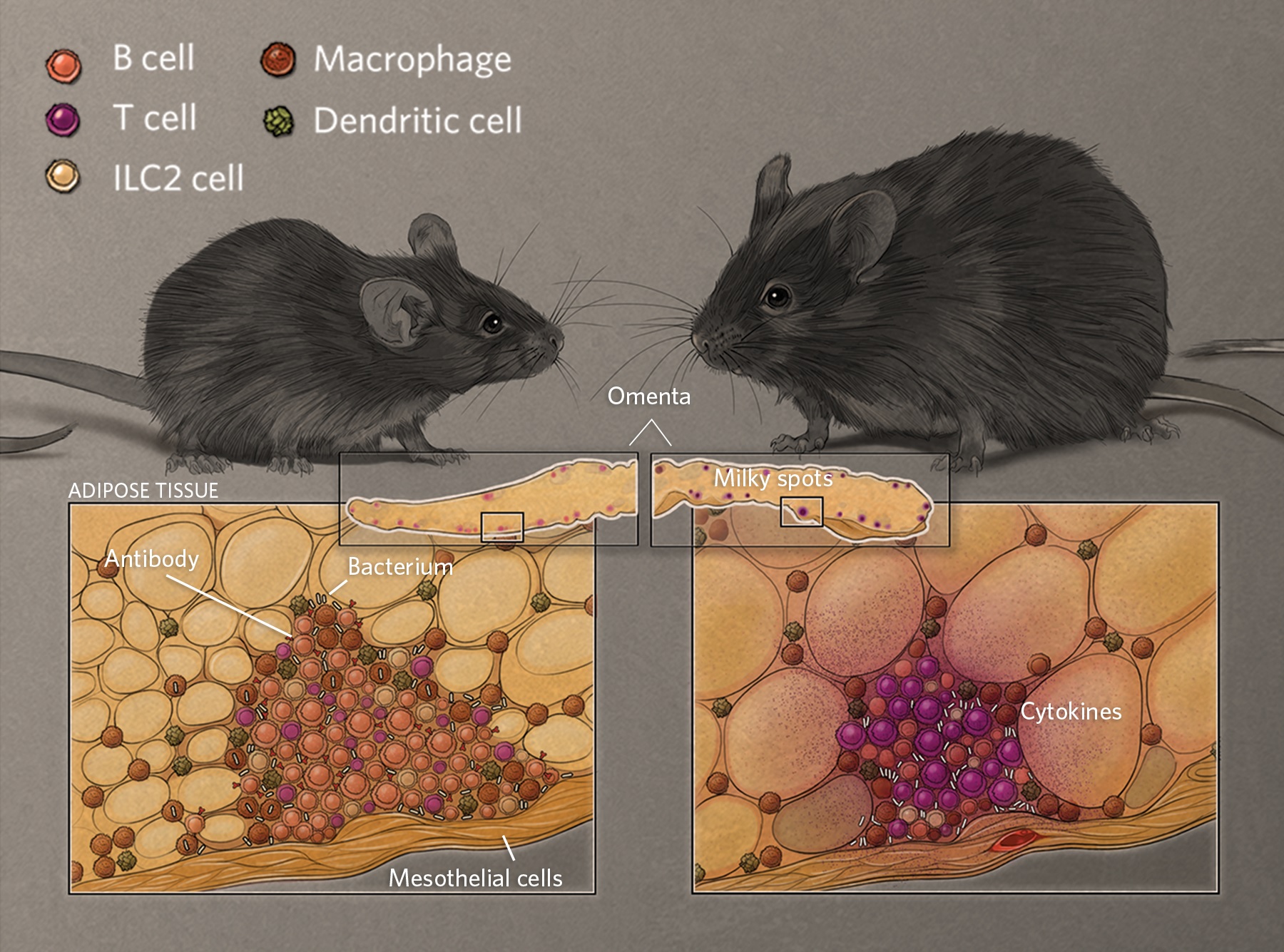 Fat-associated lymphoid clusters, or milky spots, filter abdominal fluid. Collections of immune cells search for signs of pathogenic invaders and internal damage and mount appropriate responses. In obese individuals, however, these cells can become over active, leading to chronic inflammation and autoimmune reactivity.