Focus on Clusterin! - part one

Clusterin is one of the central stress response proteins. It exists in two variants.  The major longer secreted form of clusterin (sCLU) exerts an anti-apoptotic function and the nuclear form (nCLU) has a pro-apoptotic function.

Clusterin is a heavily N-glycosylated heterodimer, is secreted by almost all mammalian tissues and can be found in plasma, milk, urine, cerebrospinal fluid or semen.

Clusterin expression is elevated during oxidative, heat or TNF induced stresses and in the course of some diseases such as gliomas, infections, Alzheimer disease, retinitis pigmentosa, myocardial infarction, renal tubular damage, autoimmunity and others.

Clusterin is able to form complexes with immunoglobulins, components, paraoxonase, leptin, lipids, heparin, bacteria, complement and others. It can also bind to beta amyloid and inhibit formation of its fibrils.

As clusterin plays a significant role in many pathophysiological conditions it is useful to depict at least some of them:

Metastasis is a leading cause of poor prognosis in patients with hepatocellular carcinoma. Secreted clusterin (sCLU) is overexpressed in HCC. It was noted that downregulation of sCLU decreased invasiveness whereas overexpression of sCLU significantly enhanced invasivity of cells via enhancing the expression level of MMP-2 and E-cadherin in model cell lines. 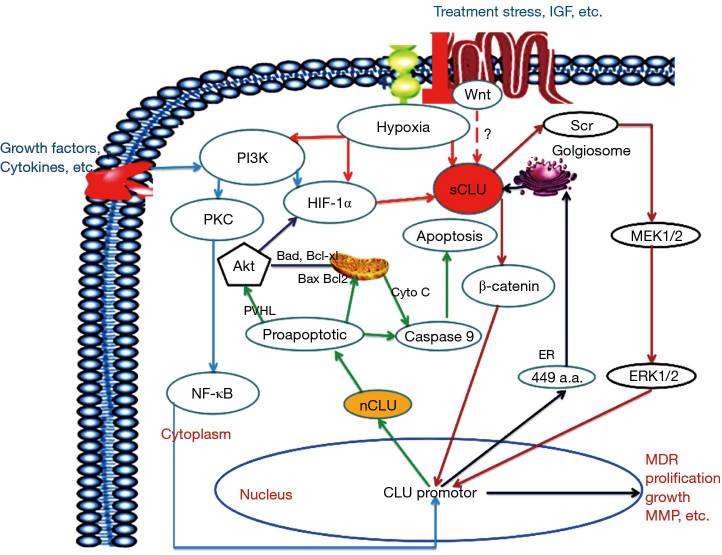 Furthermore, in these cells the inhibitory effect of meloxicam (a selective COX-2 inhibitor) on invasion and proliveration is through down-regulation of sCLU expression. However, many pathophysiological conditions by CLU shRNA decreased abundance  of p-AKT. These results suggest that targeting of sCLU may be a novel therapeutic strategy directed against HCC cell invasiveness.

The clusterin promoter is inducible by both low and high doses of IR.

Two major forms of CLU, secreted (sCLU) and nuclear (nCLU), possess opposite functions in responses to IR: sCLU is cytoprotective, whereas nCLU  is a pro-death factor. Recent studies have demonstrated that down-regulation of sCLU by silencing RNA increased cytotoxic responses to chemotherapy and IR.

Conversely sCLU was induced after low non-toxic doses of IR (0.02-0.5 Gy) in human and mice cells. This inducibility suggests a role for sCLU variant in radiation adaptive responses and increase of cell radioresistance.

Metabolic syndrome is associated with low-grade chronic inflammation. Clusterin has recently been detected as a promising marker that reflects the inflammatory process in Alzheimer's disease.

Therefore, sCLU level in sera can be a marker for obesity-associated systemic inflammation.

BioVendor is excited to present its broad portfolio in Clusterin products!

You can learn more about these products through the links below, or by contacting us at info@biovendor.com.