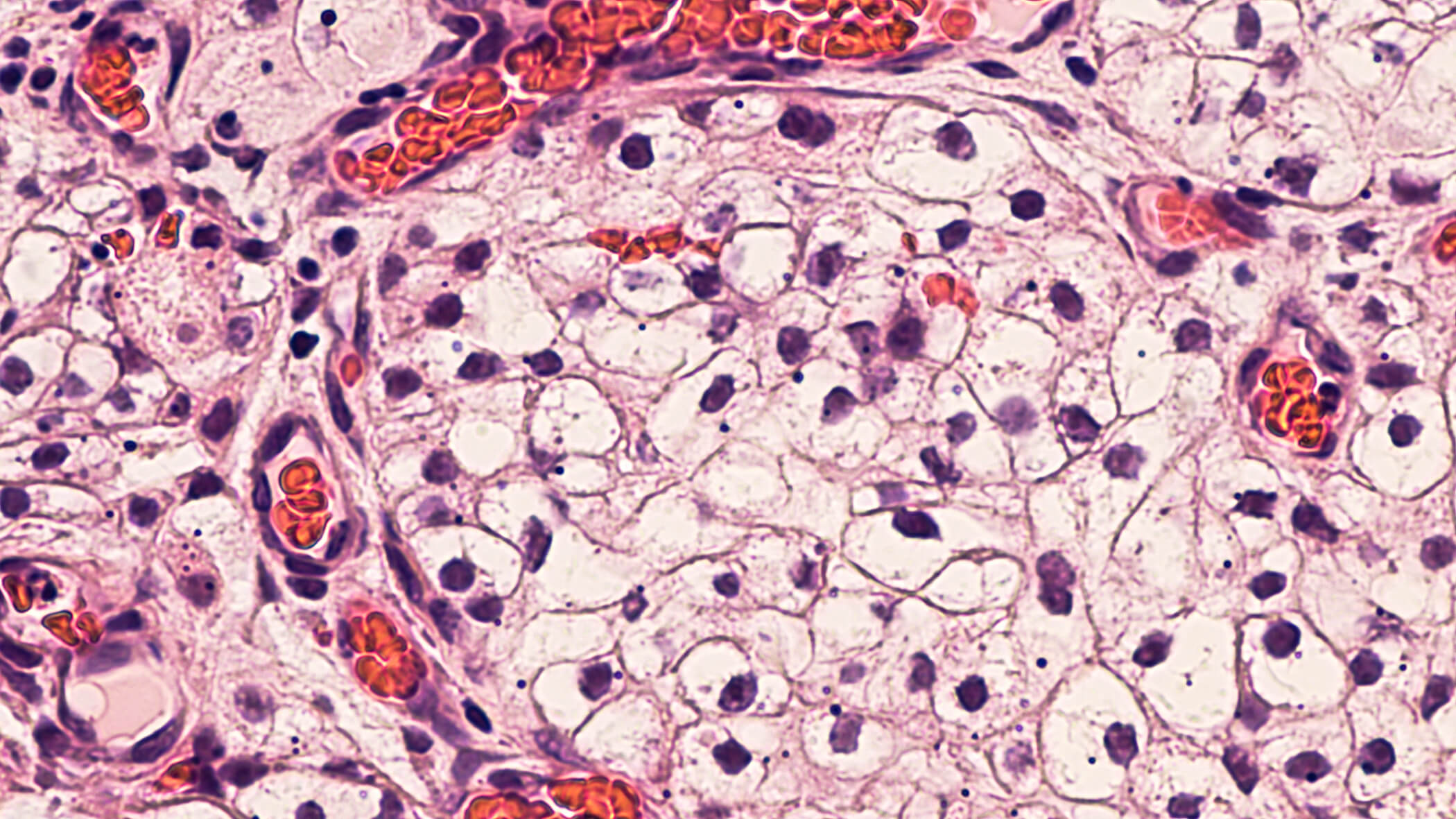 Renal cell carcinoma (RCC) is a kidney cancer that originates in the lining of the proximal convoluted tubule, a part of the very small tubes in the kidney that transport primary urine. RCC is the most common type of kidney cancer in adults, responsible for approximately 90-95% of cases. It is a heterogenous disease in terms of histology and its pathology, prognosis and schedule.

Small non-coding microRNA (miRNA) as well as long non-coding RNA are new intensively studied cancer drivers and suppressors in all types of cancer. Researchers from the European Union´s Horizon 2020 and innovation programme under Marie Sklodowska-Curie grant agreement No 824036 review of the current understanding of the role of non-coding RNAs in non-ccRCC.

The role of miRNAs in non-ccRCC has been thoroughly discussed for papillary, chromophobe, tubulocystic, clear-cell papillary, and Xp11 translocation renal cell-carcinoma. Important differences in miRNA expression patterns among non-ccRCC subtypes have been presented. Also, their potential use in diagnostics and differential diagnosis has been suggested. The miRNA expression levels convey prognostic and predictive information in some non-ccRCC subtypes and may influence clinical decision making.

This table shows examples of miRNA expression levels and their significance in different non-ccRCC subtypes.


For papillary RCC several diagnostic miRNAs have been identified with higher and lower expression levels compared to other ccRCC subtypes, including miR-155 which could be useful in distinquishing between two types of histologically different papillary RCC. Moreover, miR-155 also carries prognostic information, as its overexpression is related to decreased disease-specific survival.

Diagnosis of chromophobe RCC can be difficult by histology, so differentially expressed miRNAs could be useful potential biomarkers. For example, correct distinguishing of chromophobe RCC from oncocytoma with high sensitivity and specificity can be achieved by miRNAs miR-221, miR-210 and the miR-200 family with a two-step approach.

Clear-cell papillary RCC is characterised by upregulation of miRNAs from the miR-200 family and by high levels of miR-210. Several other miRNAs are up- or down-regulated, but their diagnostic potential must be evaluated.

Xp11 translocation RCC, the most common renal neoplasm in children, could be potentially differentiated by measuring levels of several miRNAs which are either upregulated or downregulated. The expression profile of Xp11 translocation is most similar to clear-cell papilloma RCC and shows the biggest difference to papilloma RCC.

Long noncoding RNA (lncRNA) may represent novel prognostic biomarkers and add further insight into the pathogenesis of RCC, although data for only two distinctive subtypes, papillary and chromophobe RCC, exist. The following figure shows a graphical overview of the action of cell lncRNA. 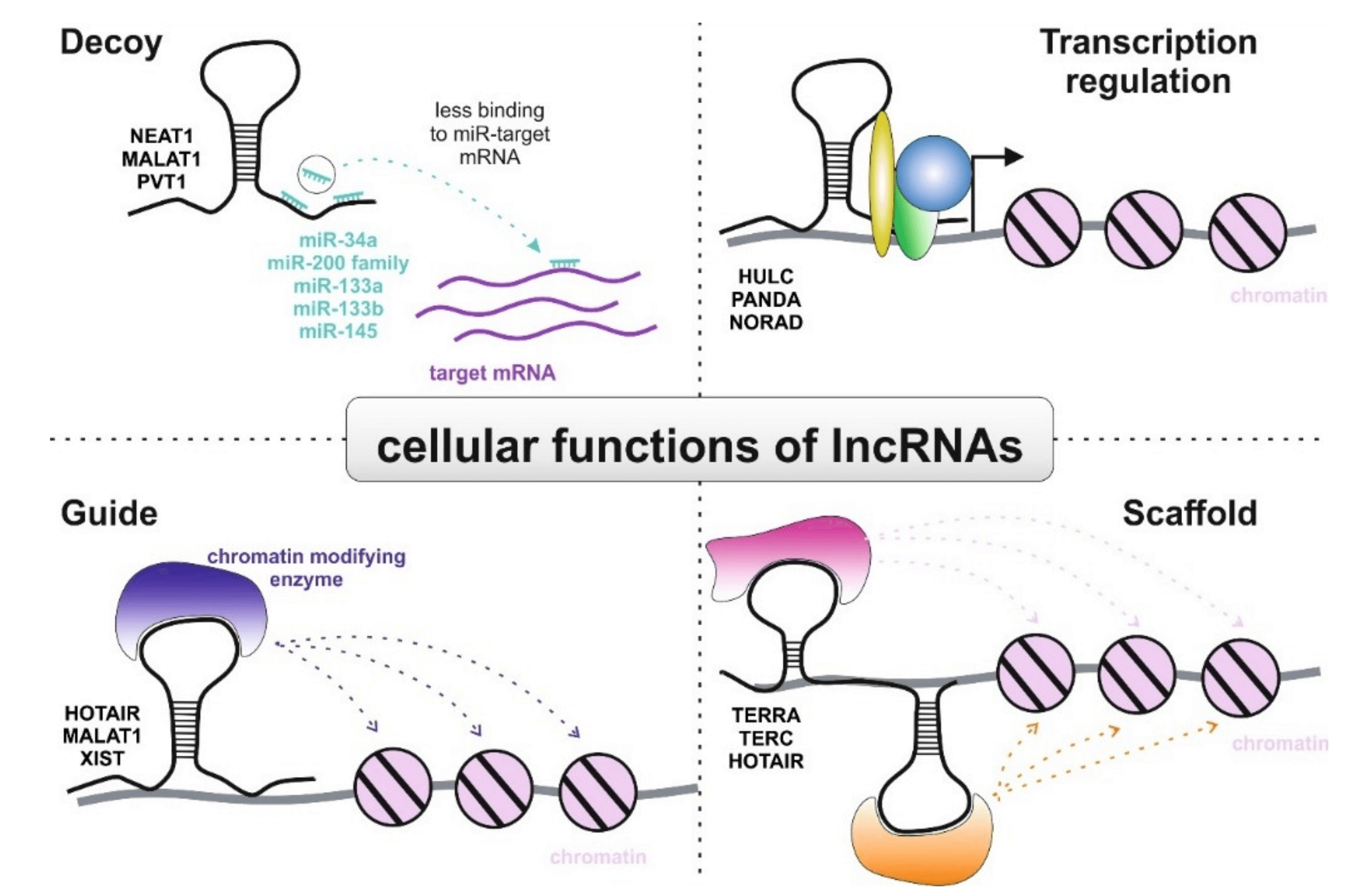 Mounting evidence suggests the role of nuclear-enriched abundant transcript 1 (NEAT1) as a competitive endogenous RNA and proposes its potential use as a biomarker and therapeutic target in cancer. Metastasis-associated lung adenocarcinoma transcript 1 (MALAT1) was shown to inﬂuence tumour progression and prognosis in ccRCC, as well as acting as a competing endogenous RNA by sponging the miRNA-200 family.

Maternally expressed 3 (MEG3) lncRNA is signiﬁcantly downregulated in papillary RCC compared to healthy kidney tissue. MEG3 was suggested to be an important regulator in the network, as it was shown to potentially interact with 14 diﬀerentially expressed miRNA.

A prognostic index including seven diﬀerentially expressed lncRNAs that each independently predicted for cumulative survival has been created. The index also predicted for clinicopathological stages, such as metastasis, nodal invasion and tumour stages.

A total of seven lncRNAs were reported to be associated with prognosis of chromophobe RCC and, therefore, may be used as future biomarkers. A ceRNA network analysis has been performed and described 16 lncRNAs and 18 miRNAs that might interact with each other, inﬂuencing 12 cancer-related pathways.