The “exercise hormone”, is not a fake news. It's in our blood and helps us lose weight. Its name is irisin and was discovered in 2012 in mice.

Irisin is secreted by muscle, increases with exercise, and mediates certain favorable effects of physical activity.

In particular, irisin has been shown to have beneficial effects in adipose tissues and can turn “white” fat into “brown” fat. Beneficial effects have also been found in brain and bone.  Studies have shown that low doses of irisin create stronger bones in mice.

The Structure of irisin contains a domain that is also present in many other proteins and it is known to bind to a wide range of different receptors.

Identification of the irisin receptor should greatly facilitate our understanding of irisin’s function in human health and exercise, but this receptor has not been identified until now.

Experts Bruce Spiegelman and his colleagues from Harvard Medical School have published in their new study that irisin is a messenger between bone and muscle tissue and triggers the process of replacing damaged or old bone cells with new ones.

In addition, scientists also found the receptors for irisin in bone and fat cells. They are a group of proteins called αV integrins.

After the scientists injected mice a low dose of irisin they observed an increase in sclerostin production in osteocytes, one of the major types of bone cells.

Sclerostin is a protein that helps break down bone, presumably so that the tissue can be rebuilt.

These results suggest that irisin is a messenger from the muscles to bones which initiates the bone reconstruction process.

In order to discover a cellular target for irisin in bones, the scientists used the hormone itself to capture the receptor in mouse osteocytes. They bound the irisin to the cells to capture its receptors which they then identified using mass spectrometry.

The results prove that a subset of integrins, especially those involving αV integrin, are functional irisin receptors, at least in osteocytes.

Monitoring bone changes in mice whose ovaries have been removed is a useful model since ovariectomized mice typically experience a loss of bone density. These changes resemble osteoporosis that occurs in menopausal women as a response to the declining levels of estrogen.

Therefore the scientists also used ovariectomized mice to study what happens after genetic deletion of the gene for irisin precursor. 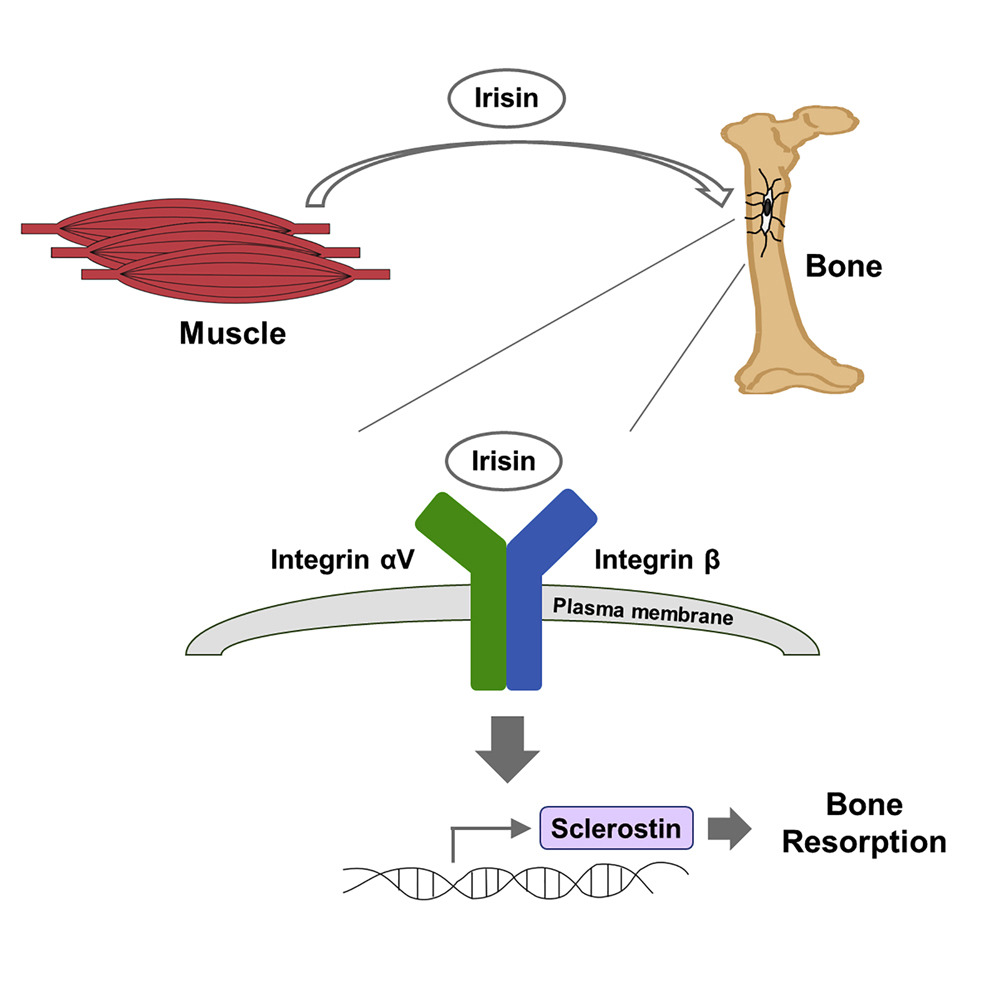 This finding could lead to potential therapy in the case of osteoporosis by blocking the binding of irisin.

Another intriguing area of interest is the role of estrogen in the action of iris on bone.

Integrin αV/β5 could be one of several receptors of irisin in other tissues whose discovery could reveal more about the function of irisin.

Though irisin’s role in osteoporosis is unclear, its effects on fat metabolism and bone density in laboratory experiments have prompted scientists to try to develop therapeutics based on irisin.

This hormone has a relatively short half-life of less than one hour in the blood, so it will by necessary to develop a longer-acting irisin for therapeutics.

According to the authors, the goal of the project was to test whether they could capture some of the benefits of exercise in molecular form and understand exactly how irisin works in bones.

Scientist hope to develop therapeutics based on irisin that would be geared toward people who are unable to exercise.

They also believe that new knowledge about irisin will help to treat diseases such as osteoporosis.