miR-129-5p as a promising biomarker in obesity research

The epidemic of obesity is now recognised as one of the most important public health problems facing the world today. Adult obesity is more common globally than under-nutrition.

Obesity is defined as excessive fat accumulation in adipose tissue and has an unclear pathogenesis.

Obesity is an epidemic health problem worldwide and a major contributor to metabolic syndrome and disorders, such as type II diabetes, nonalcoholic fatty liver disease, cardiovascular disease, and some cancers.

MicroRNAs (miRNAs) are a novel group of small noncoding RNAs that emerge as important regulators of mRNA expression. Increasing evidence has demonstrated that plenty of miRNAs play a role in obesity through regulating adipogenesis.

Adipogenesis is a complex process and contains two main stages, commitment and differentiation. miRNAs have been reported to modulate adipocyte differentiation by targeting adipogenic regulators.

For example, miR-143 enhances the differentiation of cultured human preadipocytes and directly targets FGF7 which may function as a fine-tuning molecule in the adipogenic process. Similarly, miR-27b directly targets PPARγ and inhibits the process of human adipogenesis .

The evidence suggests that different miRNAs have different effects on adipocyte differentiation. However which adipocyte-specific genes are regulated by specific miRNA is not clear so far.

Researchers from Shanghai Institute of Endocrine and Metabolic Diseases.have investigated the regulating functions of a miR-129-5p in adipogenesis in vitro and have explored its possible role in the pathogenesis of obesity in humans. Based on their study, the direct target genes of miR-129-5p were identified along with the possible signaling pathway mediating adipocyte differentiation and the browning program of white adipocytes.

Moreover, this research group explored the associations between circulating miR-129-5p and parameters of obesity and aimed to provide novel therapeutic targets for defeating obesity. 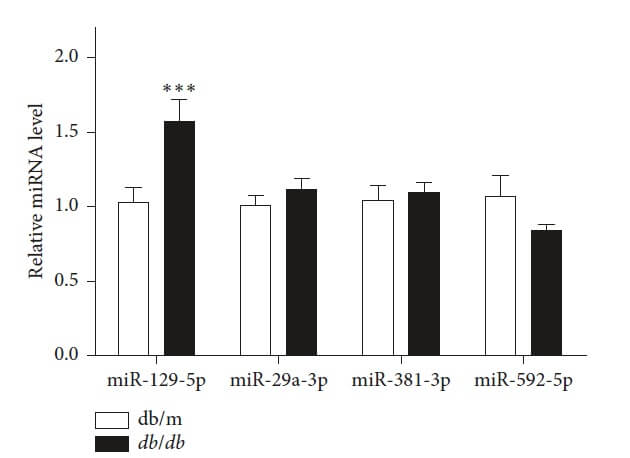 Their studies also show that miR-129-5p could significantly inhibit adipocyte differentiation and white adipocyte browning in vitro and decreases the level of specific adipose markers, such as FABP4, UCP1, and PPARγ, in mature white and brown adipocytes. miR-129-5p directly targets the ATG7gene which is predicted with bioinformatics and confirmed by dual-luciferase reporter assay.

To confirm whether miR-129-5p plays an important role in humans with obesity, they measured the serum level of miR-129-5p in 15 normal weight participants and 16 patients with simple obesity and analyzed the correlation between serum miR-129-5p with obesity indices.

As they expected, the miR-129-5p level was elevated in patients with simple obesity compared with the normal weight subjects (p < 0.01).

Interestingly, a positive correlation between miR-129-5p level and obesity indices was evident, including BMI and fat percentage, suggesting a link between obesity and miR-129-5p level. 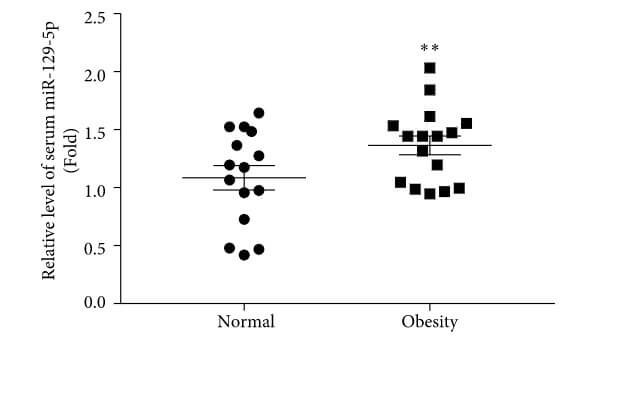 Taken together, these results demonstrated that circulating miR-129-5p might be a potential therapeutic target for obesity and related metabolic disorders and biomarker for obesity in humans.