Protein ENPP-1: What if works incorrectly?

ENPP-1, as ectonucleotide pyrophosphatase/phosphodiesterase family member 1, is a membrane-bound glycoprotein, expressed on the outer surfaces of mineralizing cells, such as osteoblasts and chondrocytes. This protein regulates bone mineralization by hydrolyzing extracellular nucleotide triphosphates to produce pyrophosphate (PPi), which inhibits hydroxyapatite crystal deposition.

Absence of ENPP-1 causes several diseases such as generalized arterial calcification of infancy (GACI) or autosomal recessive hypophosphatemic rickets (ARHR) resulting from mutations in one of several genes including ENPP-1. ENPP-1 mutations are also seen in patients with ossification of the posterior longitudinal ligament (OPLL), which is situated within the vertebral canal.

This enzyme was also reported to be associated with many other diseases including diabetes mellitus type 2, cardiovascular disease, cancer, and osteoarthritis.

But a study by Watanabe et al. shows that this protein also acts as an anti-aging factor under phosphate overload by regulating Klotho expression in mutant mice. 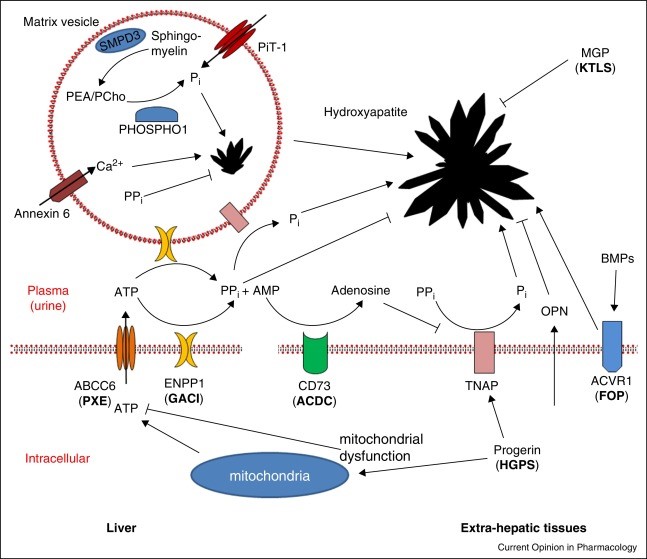 is an extremely rare, usually fatal genetic disorder, caused by mutations in the ENPP-1 gene. This gene encodes an enzyme that is necessary to make pyrophosphate. In the absence of this enzyme, pyrophosphate levels are low, and calcification in the arteries develops. The disease often results in death during the first six months of life. Babies who survive are at risk of developing an unusual form of rickets: A loss of phosphate in the urine leads to low levels of phosphate in the blood, which weakens the bones.

Hypophosphatemic rickets is almost always hereditary and may be caused by mutations in any of several genes. One of them is ENPP-1.

The gene associated with hereditary hypophosphatemic rickets is involved in keeping a proper balance of phosphate in the body. Many of these genes, included ENPP-1, directly or indirectly regulate a protein that normally inhibits the kidneys' ability to reabsorb phosphate into the blood. Mutations affecting the function of these genes increase the production (or reduce the breakdown) of the protein, causing the protein to be overactive. The overactivity of the protein reduces phosphate reabsorption by the kidneys, leading to the features of this condition.

Relation with other diseases

ENPP-1 is implicated in a variety of physiological and pathological conditions. However, the precise mechanisms by which ENPP-1 participates in these cellular processes remain unclarified because of the lack of structural information.