Colorectal cancer (CRC) is the third most common cancer worldwide and second leading cause of malignant mortality in industrialized countries. Risk factors include high-fat diet, low fibre intake, high consumption of alcohol, and low physical activity – habits that are often associated with western lifestyle. Incidence dramatically increases after the age of 50 and is higher in men than women.

An interesting fact about CRC is that progression to late adenoma or metastatic cancer takes about 10 years from formation of the first small polyps in the intestine. Doctors are able to divide this period of time to the IV stages of cancer. If the CRC is detected in the first two stages, the patient has 90% chance for survival because it is quite easy to eliminate the small polyps by classical surgery. If CRC is revealed in later stages, the chance for survival dramatically decreases to 20%.

Unfortunately, stages I and II are asymptomatic, meaning that the patient does not feel any pain or discomfort that would lead to seeing a physician. That is the reason why CRC screening programs for persons older than 50 years exist in many countries including Czech Republic. 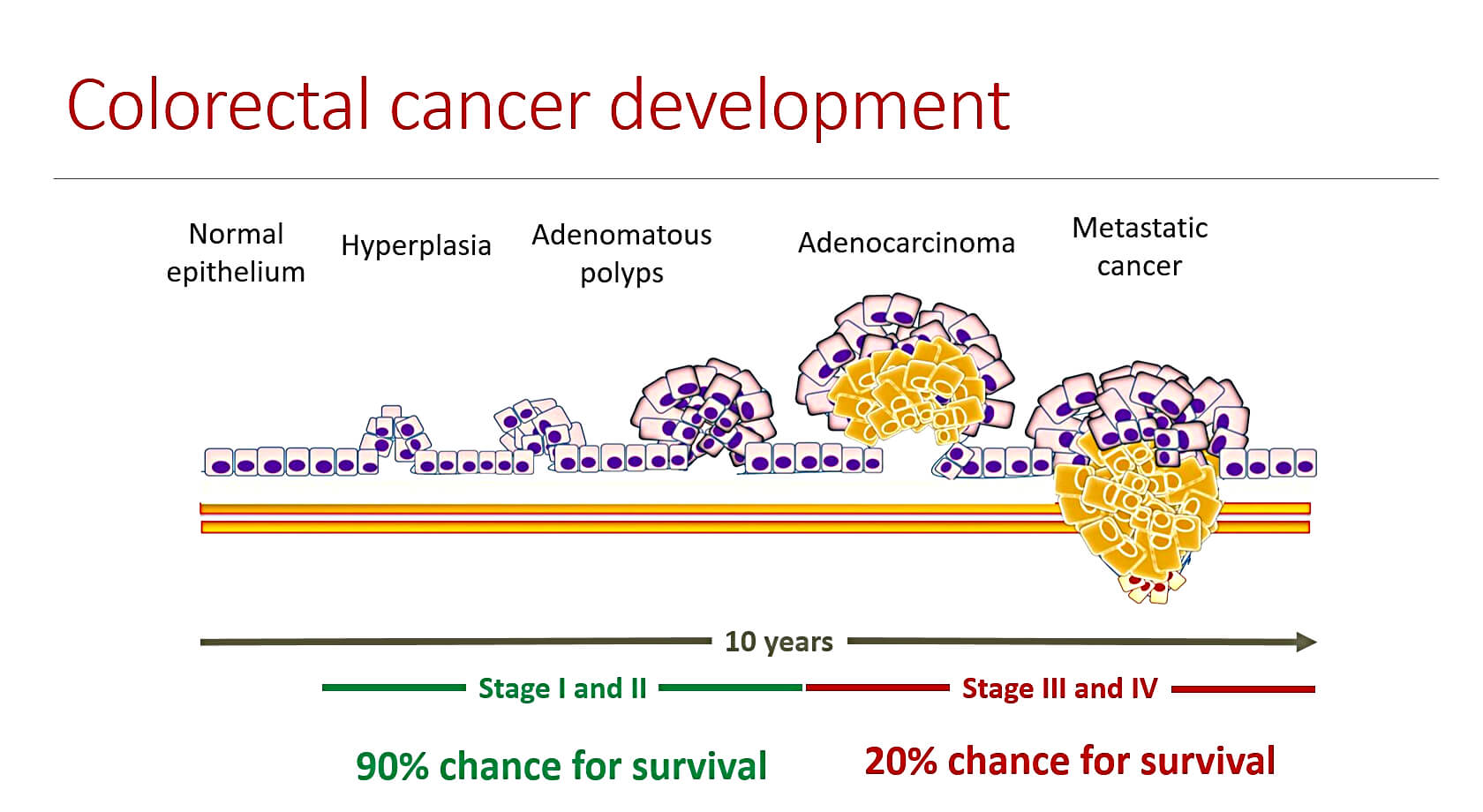 Screening programs are usually based on the two types of test:

It is clear that a non-invasive CRC screening test would result in higher early detection rates, saving many lives.

In the following picture is shown ROC analysis of the diagnostic strength of the test –discrimination between CRC stages I and II and healthy donors. 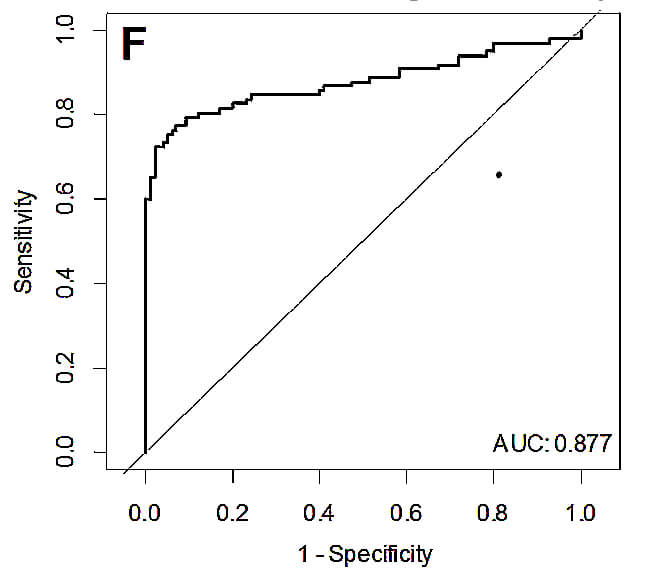 Many CRC researchers believe that a non-invasive CRC test could be developed based on the detection of microRNA (miRNA) molecules in the blood.

In 2016 Professor Ondřej Slabý and his group in CEITEC Masaryk University published a major prospective biomarker study focused on the miRNA connected to the early diagnosis of CRC. They were able to identify four miRNA - miR-23a-3p, miR-27a-3p, miR-142-5p, and miR-376-5p, with miR-93-5p as the endogenous control. These four miRNAs were upregulated in the serum samples of stage I and II CRC patients.

Using this miRNA panel they were able to discriminate early stages of CRC from healthy subjects with 81,4% sensitivity and 81,0% specificity. If it were possible to use this panel in clinical diagnostic labs, it could revolutionize CRC screening.

Only those subjects with positive or undetermined results in the miRNA blood based test would have to undergo colonoscopy. The benefits are more than clear – more people are willing to do the blood based test, so more people are screened and early cancer detection rates are increased. Moreover, such a test would reduce costs and physicians’ time spent on superfluous colonoscopies. 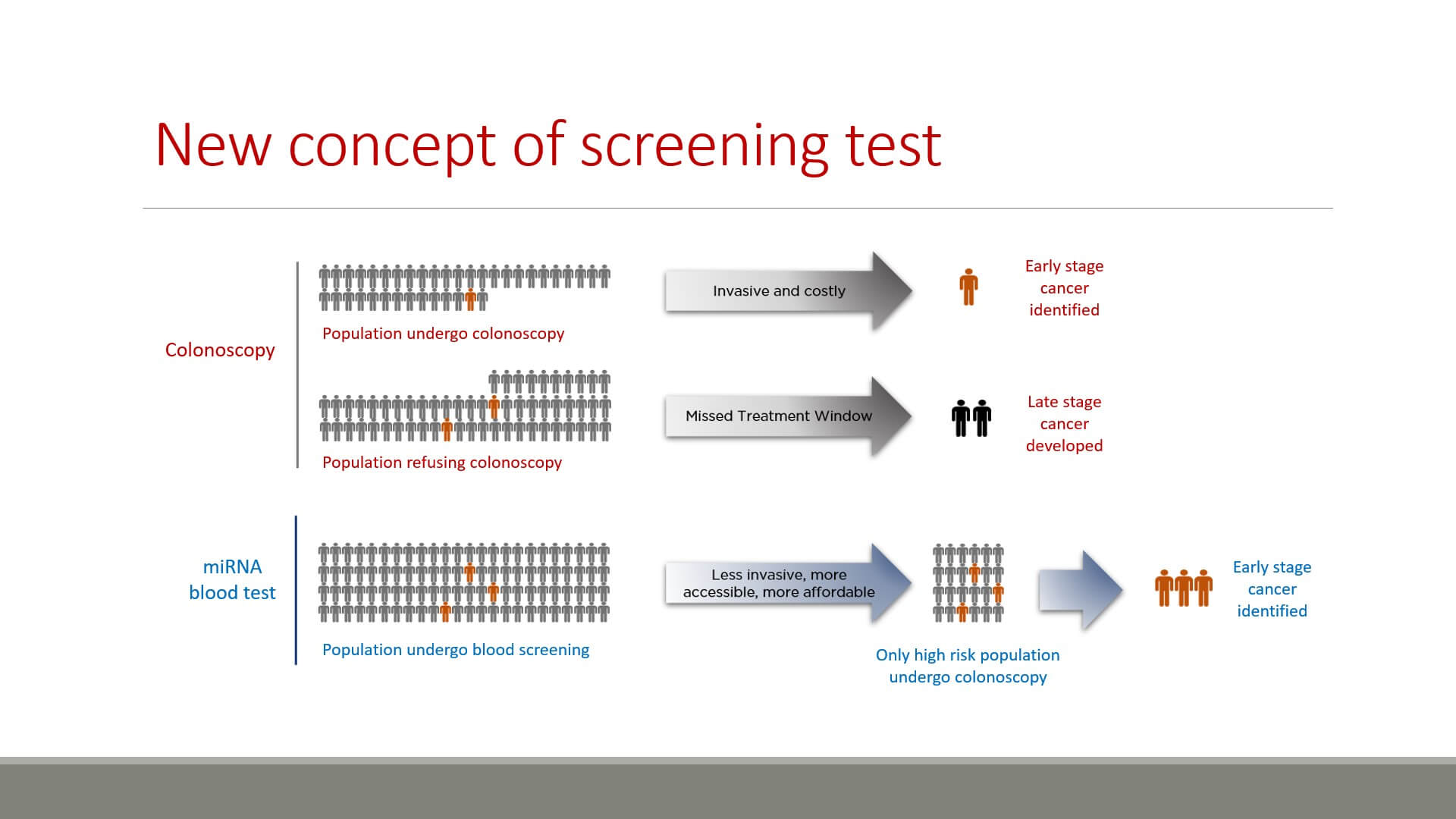 In order to really benefit from this tool in routine diagnostics, it is necessary to have a CE-IVD certified product, which is a mandatory condition for each diagnostic test utilized in European Union.

At the beginning of the CE-IVD certification process, it is necessary to choose proper measurement technology which will be able to pass the strict clinical validation criteria. With regard to miRNA molecules, there are still broad discussions about this topic. There is a lack of proper data to evaluate the analytical characteristics of miRNA measurement technologies regarding their clinical utilization. This issue is the topic of a new scientific paper published by scientists from Brno in collaboration with BioVendor.

Not by accident, researchers from Brno (involved in INBIO and Horizon 2020 projects), in cooperation with FNUSA ICRC and researchers from BioVendor, evaluated three miRNA targets from the proposed panel for colorectal cancer screening (miR-142-5p, miR-23a-3p, miR-93-5p). A variety of miRNA detection technologies were used, including some common methods (TaqMan miRNA assays, TaqMan Advanced assays) and some emerging methods (SplintR-qPCR, miREIA).

The main principles of the technologies are following:

This study revealed the TaqMan Advanced assays as the least appropriate measurement principle, because the universal RT-priming strategy can be very easily influenced by sample dilution media.

miREIA technology outperformed other methods in robustness testing. Variance in five uniform measurements was under 20%, which is the critical assumption for CE-IVD certification. SplintR-qPCR has shown similar results, which implies that methods evading the reverse transcription process are more robust.

On the other hand, RT-qPCR represented by TaqMan miRNA assays is still a more sensitive technology and is useful in measurement of challenging and low concentrated samples. Methods evading RT step are very promising technologies, but in the context of serum CRC screening, the level of sensitivity must be improved.

BioVendor and its scientific collaborators are already working towards an increase in sensitivity that will allow RT-free miRNA detection technologies to advance as the lead candidate for CRC screening clinical diagnostic use.