Migraine headache is an episodic, typically unilateral incapacitating throbbing headache associated not only with nausea, vomiting, and photophobia but also with other neurologic dysfunctions. It is the most common neurologic condition and is more prevalent than asthma, diabetes and epilepsy combined.

The World Health Organization ranked migraine as one of the most disabling conditions, equivalent to the disability associated with quadriplegia. Migraine affected more than 74 million people in the US, France, Germany, Italy, Spain, and the UK. Women are 3 times more likely to have migraine than men.

Migraine brain = “sensitive brain”. Migraines are triggered by a variety of environmental conditions (loud noise, bright light, strong smells), foods (alcohol, snacks, aged cheeses, yeast product) and physiologic conditions (stress, menopause). Most individuals exposed to these strong stimuli experience attenuation of the stimuli within minutes, but in the brain of a “migraine”, the strength of the stimuli continues to grow, and a migraine crisis can occur.

Migraines may progress through four stages (though you may not experience all stages): 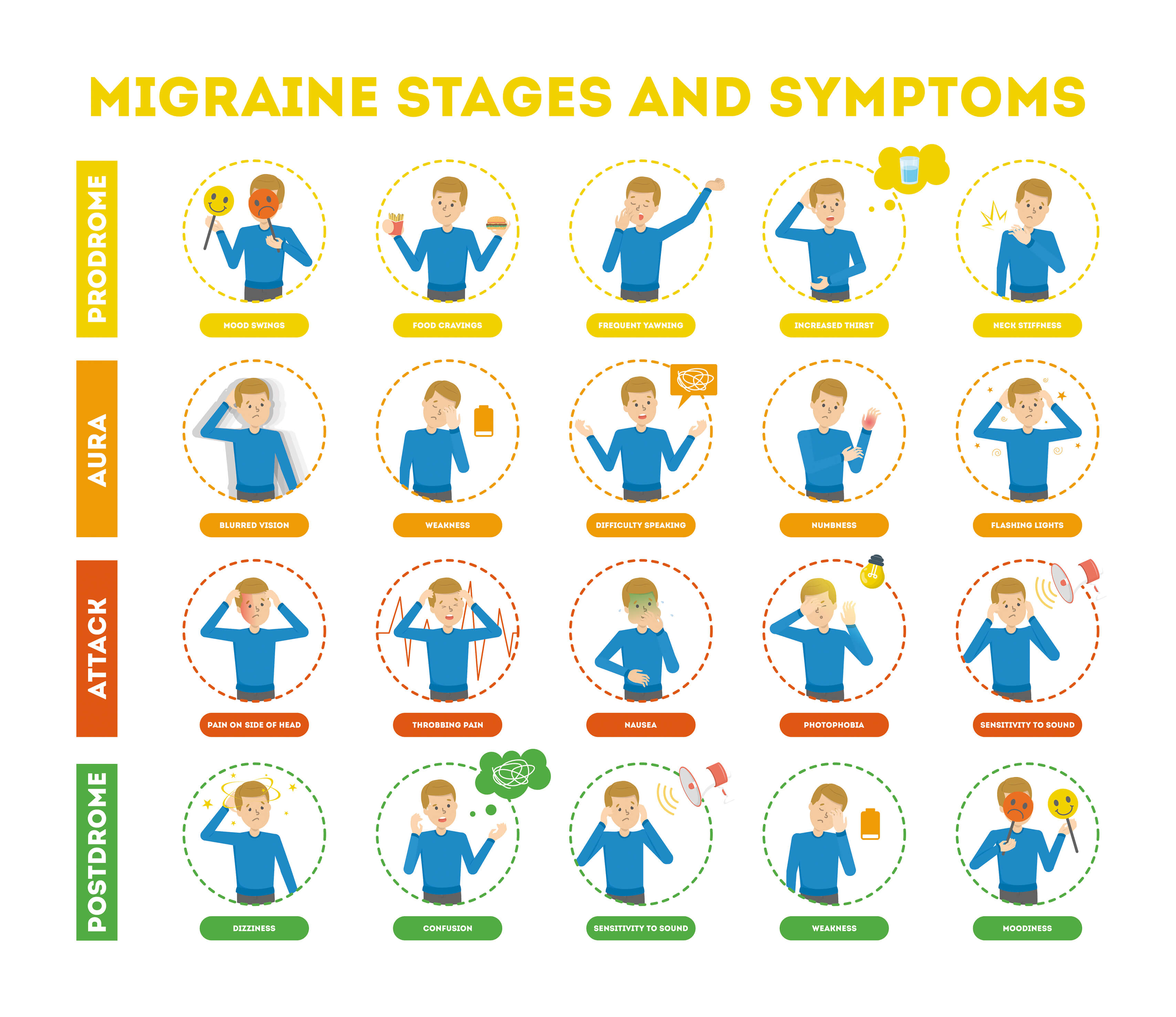 The pathogenesis of the migraine has been associated with “cortical spreading depression” (CSD) as well as with meningeal and cerebral vasodilatation. CSD induction regulates gene expression of vasodilatory peptides. Of 1,180 genes examined;,the ones regulated by CSD were involved in vascular responses that may be responsible for the propagation the pain. Neurogenic inflammation continues to be considered a key pathological process in the origin of headaches.

Mast cells are important in allergic reaction, inflammation, autoimmunity, arthritis and serve as key “sensor” and “effector” cells in migraines locally in the meninges, as well as in the hypothalamus. In addition to vasodilatory molecules, mast cells secrete various pro-inflammatory mediators, such as kinins, prostaglandins, histamine and numerous cytokines, including IL-6. Similar increase these molecules were noted in the serum of patients during the migraine headache.

The relation between histamine and headache has been on the agenda for almost a hundred years. A multitude of studies have been published focusing on the ability of histamine to induce headache and on the effect of antihistamines in the treatment of headache.

Histamine is a biogenic monoamine synthesized from the amino acid L-histidine by the L-histidine decarboxylase and metabolized by the enzyme histamine N-methyltransferase, using S-adenosylmethionine as a methyl donor. Histamine is located throughout the entire organism with high concentrations in lung, skin and gastrointestinal tract. It is synthetized and stored in mast cells and basophils. It plays a role in multiple mechanisms both immunological and physiological, stimulating gastric secretion, inflammation, smooth muscle contraction, vasodilatation, permeability and much more. Histamine also functions as a neurotransmitter. It is synthetized in histaminergic neurons located in the posterior hypothalamus. Histamine carries out its effects via 4 subtypes of 7-transmembrane G-protein coupled receptors: H1, H2, H3 and H4 receptors. 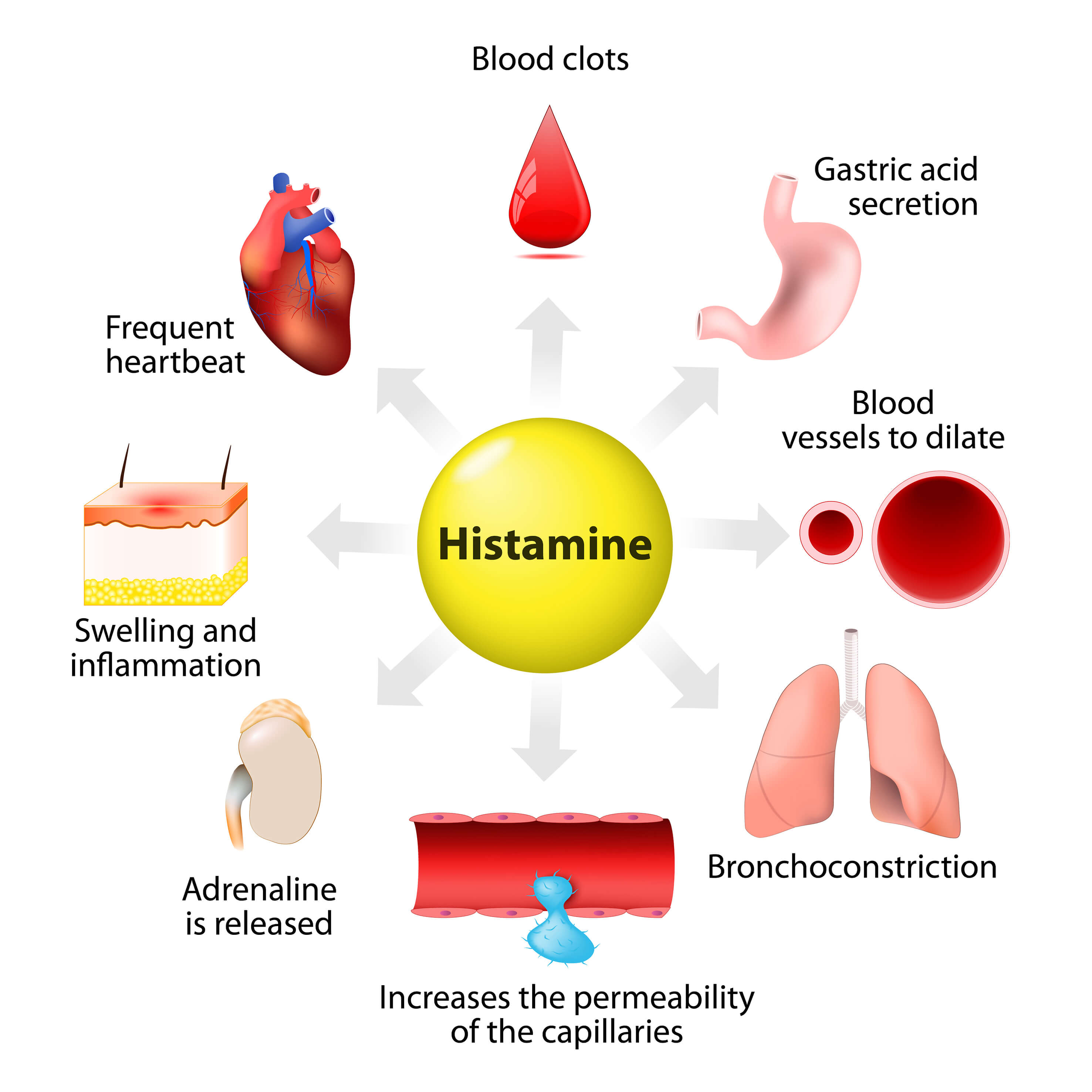 At about that time, a number of papers reported higher plasma histamine levels in patients with a history of migraines that further increased during attacks, histamine release also increased from basophils taken from migraines.

The objective was to evaluate the sensitivity to histamine in normal subjects and in patients with these headaches and to develop an experimental model of vascular headache. All 48 participants received a continuous infusion of histamine chloride for 30 min., 24 of 25 migraineurs developed a throbbing headache, while participants from the two other groups only experienced, at worst, a moderate, pressing type of headache.

This study proved that histamine induces more or stronger headaches in migraine patients than in normal individuals.

Mast cells degranulation and release of histamine is inhibited by histamine via the H3 receptor. H3 receptor is primarily located in brain structures (cortex, cerebellum, dorsal thalamus, hypothalamus, amygdala, hippocampus, striatum and basal ganglia) and has multiple signal transduction mechanisms. It signals by activation of MAPK and via activation of phospholipase C leading to an increase in cytosolic Ca2+ with latter leading to an inhibition of histamine synthesis and release (auto-receptor function).

A potential therapeutic target would be a receptor with a stabilizing function on mast cells preventing or minimizing the degranulation and secondly the neurogenic inflammation. Another possible target is a receptor located on the nerve terminals inhibiting the release of neuropeptides.