The important role of resistin in the pathology of T2DM

Type-2 diabetes mellitus (T2DM) is a major health problem in the world and many studies have been done in this topic. Nowadays we can certainly say, that pathogenesis of T2DM is connected to obesity-associated insulin resistance and dysglycemia. Despite the fact, that individuals of South Asian descent have a higher risk of developing T2DM for a given body mass index (BMI) compared to Caucasians, majority of the published data was obtained by studying western populations. Moreover, in South Asians, different mechanisms could operate in the pathogenesis of these processes. The pressure for new data in this field is even higher because of recent escalation of obesity in this region.

This issue has given rise the new study conducted in Sri Lanka. The aim was to detect adipose tissue characteristics connected with obesity, insulin resistance, and dysglycemia in adult women and to understand the mechanisms leading to these pathological states in South Asians.

The first part of the study has consisted of the determination of the level of insulin resistance and number of crown like structures (CLS) in adipose tissue. Results were correlated with sample characteristics connected to the obesity and T2DM like body mass index, waist circumference and level of fasting glucose. Generally, only marginal dependencies between groups were detected. Especially the number of CLS was not different between women with normal fasting glucose (NFG) vs. impaired fasting glucose (IFG).

As the number of CLS in adipose tissue is the main indicator of macrophage infiltration it is probably not the major mechanism responsible for dysglycemia in South Asians.

The second part of the study was focused on the analysis of the serum levels of major adipocytokines including leptin, adiponectin, resistin, TNF-alpha, IL-6, IL-8, IL-10, omentin-1 and chemerin, as well as the systemic inflammatory marker hsCRP in women with NFG vs. those with IFG. Of the studied adipocytokines, serum resistin levels were on average about 60% higher in the women with IFG (p < 0.05). 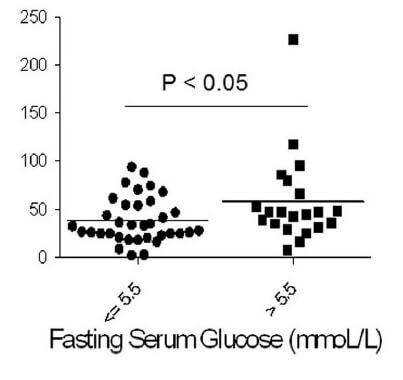 This was really interesting finding, because resistin is an important adipocytokine which can induce insulin resistance by interfering with the insulin signaling cascade via activation of the serine kinases in the adipose tissue. To confirm this hypothesis authors did also the immunohistochemistry of resistin directly in the adipose tissue.

To conclude the brilliant work of Wietunge et al, resistin may be an important adipokine linking central adiposity and insulin resistance in South Asians. Both systemic and adipose tissue resistin are linked to dysglycemia in these individuals and may be a potential biomarker for diabetes in this population.